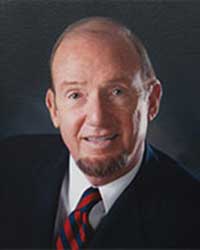 A former associate dean from 1995 to 1997, Professor Lynch had an extraordinary legal and law teaching career, including 22 years as a judge advocate in the U.S. Navy. Lynch coached the interscholastic National Moot Court Team for ten years, taught a bar preparation course at the law school for ten years, and tutored individuals for the bar for six years. Professor Lynch won the school’s “Favorite Teacher Award” no fewer than 10 times in his nearly 40 years at the law school.