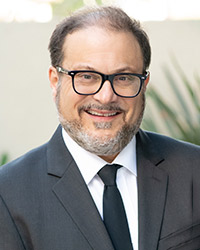 James Cooper is Professor of Law and Director of International Legal Studies at California Western. Professor Cooper is a serial disrupter – first in the law reform movement in Latin America and later with governments and emerging technology companies readying for Law 4.0.

For more than two decades, he directed Proyecto ACCESO, a judicial technology transfer project funded by governments, foundations, and international agencies, raising more than $US 5 million for this initiative. As Latin American countries moved their criminal systems from the inquisitorial model to the adversarial model, he consulted for the U.S. Department of Justice, U.S. Department of State, the Organization of American States, U.S. Patent and Trademark Office, the Bolivian President’s Office for the Constituent Assembly negotiations, Mexico’s Executive Branch (Los Pinos), Paraguay’s Senate, and a number of other governments, international agencies, regional aid organizations, and technical cooperation agencies.

Professor Cooper’s scholarship has appeared in leading journals in North America, South America, and Europe. He has been a member of the U.S. government’s delegation to the World Intellectual Property Organization.  His public policy work has been commissioned by the Konrad Adenauer Foundation and the Friedrich Ebert Foundation of Germany and the Inter-American Drug Abuse Control Commission of the Organization of American States.

Professor Cooper has been profiled in The Wall Street Journal and in The Washington Post and featured in the Daily Mail, New York Times, South China Morning Post, Time Magazine, and USA Today.

Professor Cooper’s work has recently focused on the legal regulation of emerging technologies including blockchain, artificial intelligence, and the metaverse.  He is a Co-curator of Digital Davos, a network on the sidelines of the World Economic Forum in Davos, Switzerland, and has been an advisor to blockchain companies in Asia and North America. Professor Cooper has written extensively on financial technology publishing in The Taipei Times, The International Business Times, The Business Times of Singapore, The Hill, Yahoo! Finance, and Coindesk among other platforms. Professor Cooper is a member of Protocol’s Braintrust.