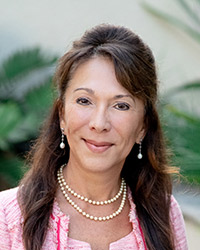 Professor Laura M. Padilla joined the California Western School of Law faculty in 1992, and earned tenure in 1997. She was Associate Dean for Administration from 2007 - 2013 where her excellent organizational and leadership skills served the law school in many capacities. She was General Counsel for the law school from 2007 - 2012. She has served on AALS committees and site teams, has been on numerous Stanford boards, and was a Kellogg Fellow. She was recognized by the San Diego County Bar Association with its 2008 Service to Legal Education Award, by Stanford University with a Governor's Award in 2009, was elected into the American Law Institute in 2010, and was named a Top Attorney by the San Diego Daily Transcript in 2012. She is interested in the connections between property, power & gender, and land use in the context of broader social issues.

Padilla was educated at Stanford University, receiving a B.A. in Communication in 1983. She received a J.D. from Stanford Law School in 1987. While at the law school, she was business manager of the Stanford Journal of International Law, co-chaired the Stanford Latino Law Students Association, and externed with Professor Mauro Cappelletti at the European University Institute. She was in private legal practice where she specialized in transactional law for several years.