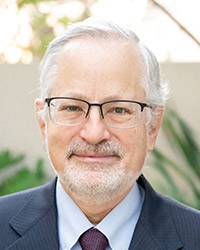 Professor Klein was born and raised in Texas. After graduating from college and rejecting his initial plans either of being a mathematician or working as a furniture factory representative with his father, he attended law school where—much to his and his family's surprise—he finished in the top ten in his class, serving both on the law review and the board of advocates.

Professor Klein then began a more than 20-year career as a civil litigator, practicing in both the federal and state courts of Texas and California, with focus on business litigation and civil appeals. In the course of his career, Professor Klein has litigated and/or arbitrated scores of matters at both the trial and appellate level, for both plaintiffs and defendants.

Before joining the California Western faculty, he was a partner in the litigation department of the San Diego office of Foley & Lardner LLP, heading the office's appellate practice, as well as serving as the office's pro bono partner and professional responsibility partner. From 1994 through 1997, he interrupted his legal practice to be an Assistant Professor at New England School of Law (NESL) in Boston. Professor Klein left NESL and returned to private practice as a means to return to his adopted hometown of San Diego.

Throughout Professor Klein's professional career he has been active in his community, and has devoted substantial time to pro bono legal matters. He currently is serving as the President of the Advisory Council of the Community Law Project, on the advisory board of the UC San Diego School of Medicine Student-Run Free Medical Clinic, as a Senior Advisor to Team UP (an initiative of United Policyholders), as a Master in the Wallace Inn of Court, and as a Consumer Representative to the National Association of Insurance Commissioners.

The first many years of Professor Klein’s scholarly work focused on the the tension inherent in judicial decision making in democracies. The more recent focus of Professor Klein’s research, however, has been on how issues of available, adequate, and affordable homeowner insurance are exposed and exacerbated by natural disasters, and what can be done about it. This work has led to his invitation to speak on these matters to insurers, mortgage lenders, regulators, legislators, and the federal government. It also has been the focus of his pro bono work.

Much to embarrassment of Professor Klein's family, he has been a frequent commentator on legal issues on local television (and once on CNN). Professor Klein believes that as the title of a recent book suggests, soccer does indeed explain the world, and he has played (poorly) and coached (adequately) for over 40 years. He is also active in his congregation, but contrary to what this might suggest, he does not consider himself an "all-around good guy."